Remembrance piece created by Anna Roebuck with the students at The Ormiston Ilkeston Enterprise Academy in The King George Gallery.

A year 7 group suggested the installation should be a figure, which I decided was a great idea.The idea is that figure is dispersing and becoming one with the field of poppies, reflecting the fragility of life. 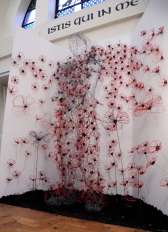 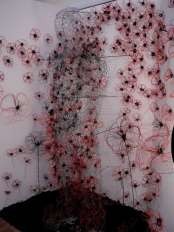 10 days in the making

I loved creating the piece with the students at The Ormiston Ilkeston Enterprise Academy in The King George Gallery. The idea was that every student in school would create a poppy and after 10 full on days I think we came close to that. The project was designed so that all years would be able to make something, even those who consider themselves to be ‘not arty’.

I was unsure of the final design, it really grew out of the project and discussions with each class. Below are images of the installation in progress, with just a few hundred more poppies to add to the piece! 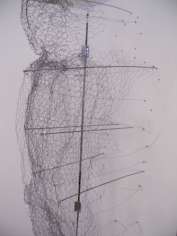